‘Rock Of Ages’ At The Pantages Theatre

In 1987 on the Sunset Strip, a small town girl met a big city rocker and in LA’s most famous rock club, they fell in love to the greatest songs of the 80’s. Relive this era through the guitar smashing hit musical Rock Of Ages; an arena-rock love story told through the mind-blowing, face-melting hits of Journey, Night Ranger, STYX, REO Speedwagon, Pat Benetar, Twisted Sister, Poison, Asia, Whitesnake and many more. 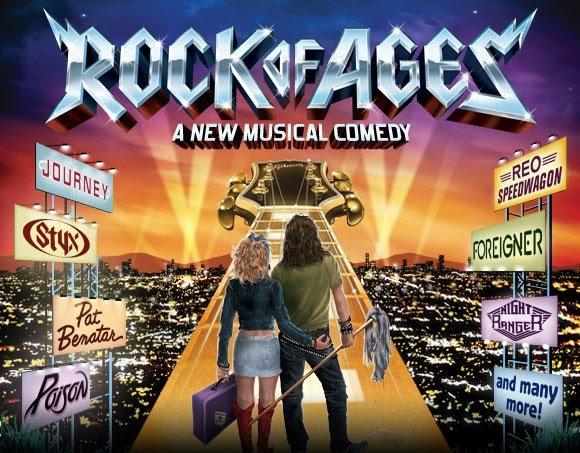 The new musical comedy Rock Of Ages features a mix of 28 rockin’ 80’s tunes including Don’t Stop Believin’, We Built This City, The Final Countdown, Wanted Dead Or Alive, Here I Go Again, Can’t Fight This Feeling, and I Want To Know What Love Is. Now you can sing along with the cast and audience in a theater setting; as opposed to singing by yourself in the shower or car.

The saying that “comedy is tragedy plus time” may hold no truer than in the case of the hair-band days of the late 1980s. Though it’s hard to imagine now, these bands dominated the stage and charts with their unironic combination of mascara and machismo.

Rock Of Ages takes place at the famous Pantages Theatre in the heart of Hollywood, on Hollywood Boulevard, right down the block from Vine Street. It’s a fitting location: The Pantages has become one of the greatest landmarks of Hollywood, signifying both the glorious past and adventuresome future of the world’s entertainment capital.

Watch a video on Rock Of Ages here.

Don’t miss this awesomely good time about dreaming big, playing loud and partying on! What are some of your favorite 80’s songs?