Ringling Bros. and Barnum & Bailey presents Built To Amaze!, is an extraordinarily engineered circus experience where children of all ages find out what it takes to build The Greatest Show On Earth. The foundation is set and the rising anticipation of high-energy, high-jinx, and hilarity is ready to be transported by colorful circus machinery and unleashed from shipping crates right before the audience’s eyes! Ringling Bros. presents Built To Amaze! will travel more than 30,000 miles over two years on the world’s longest, privately owned train to present audiences with riveting acts and astonishing animal presentations.

Andrew McClain, Ringmaster and America’s favorite cowboy takes the Ringling Bros. reins and accompanied by his horse Comanche, leads his Built To Amaze! funny and mischievous super circus supervisors, to construct The Greatest Show On Earth. A fantastic design with more than 110 of the world’s best performers representing 17 countries along with 95 exotic and domestic animals will be assembled, creating never-before-seen heart pounding performances. 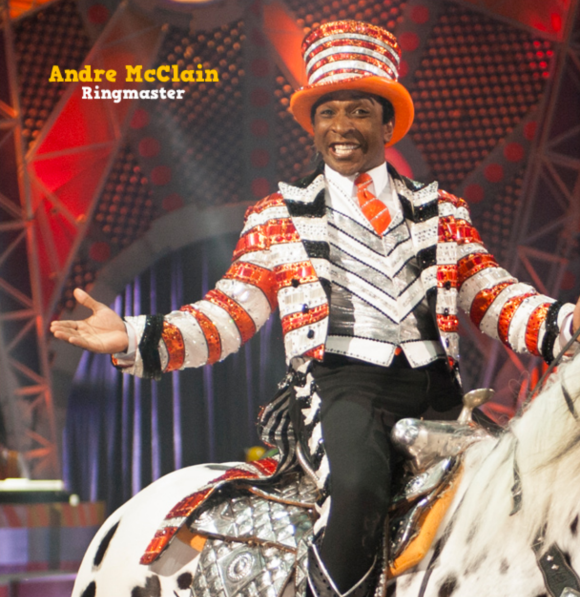 Ringling Bros. is thrilled to introduce nine-time international award-winning comedic animal presenting duo Alex and Irina Emelin of Russia. Builders of their own right, Alex and Irina Emelin have spent years constructing unique acts full of comedy, animals, magic, and dynamic athleticism earning the married couple nine international comedy awards. The result is a custom-built comedic duo with an electric animal menagerie, including 16 black and white poodles. Hilarious mischief is non-stop as they compete against one another to construct The Greatest Show On Earth! In addition to their many Built To Amaze! responsibilities, Alex and Irina perform an animal magic transformation with an outcome so outrageous that it is guaranteed to leave audiences speechless.

Ringling Bros. Tower Tumblers, a troupe of competitive aerial athletes from the Ukraine who launch themselves from trampolines to scale, repel, and pass through a three-story high translucent tower. The Tower Tumblers will leave audiences spell-bound by sing an unusual trampoline apparatus to perform rare acrobatic combinations of calculated strength and daring precision to defy gravity. The troupe uses two trampolines as spring boards to catapult their bodies in a whimsical but harmonized, freestyle aerial tumble where the dive over, around, and even through a three-story high translucent tower! Ringling Bros. brings a spirited and fiery competition of basketball with the next generation of whirling unicyclists, the legendary King Charles Troupe hailing from New York City! The King Charles Troupe was first featured in 1969 by Ringling Bros. producer Irvin Feld, grandfather of producers Nicole Feld and Alana Feld. Now a new generation fo producer and performer has come together again. Twelve basketball players present a continuous, whirling display of one-wheeled excitement while perilously perched on unicycles, some teetering more than ten feet in the air! Audiences will be astounded at the troupes agility and balance as each team dribbles, passes, shoots, and weaves their way with outrageous skill and high-speed comedic antics in the wackiest game of b-ball ever played.

Tabayara, standing fearless inside the tiger arena, eye to eye with 13 ferocious exotic big cats, creates a thrilling display of absolute amazement between a man and his tigers. In Built To Amaze!, he presents a remarkable new element as four tigers, each poised with just one razor-sharp claw on a spindle and using their hind legs rotate in perfect unison. Tabayara and these mighty tigers jump, roar, and dance, and have the audience on the edge of their seats. 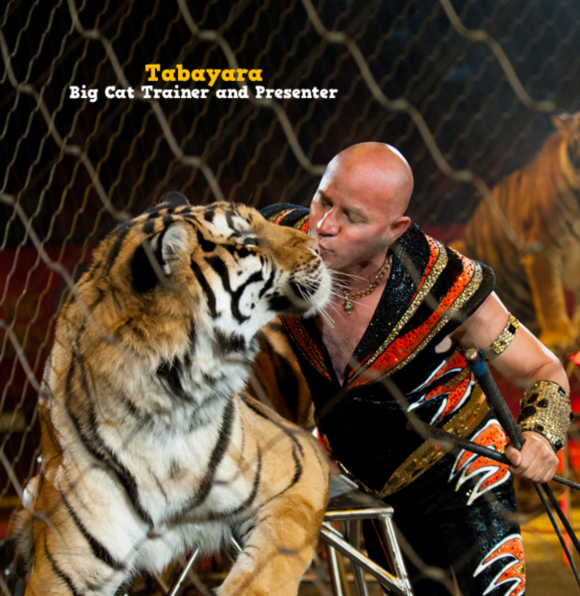 The Danuir Family dazzle as they raise the roof, looming high above the arena floor, on a high-wire as thin as a pencil, as they execute difficult acrobatics and dangerous stunts. The Danguir’s construct two-man pyramids and intricate jumps, including an incredible one man leap from one troupe member’s shoulder to another’s. Audiences also will witness the inconceivable and fearless high-wire attempt by troupe leader Mustafa when he jumps a car length’s distance over four troupe members balanced on the high-wire.

The most popular divas on the planet will astound as Ringling Bros. epic Asian elephants show off fresh and classic dance moves to contemporary music reflecting each elephant’s unique talent and personality.

The Human Cannon Ball, Elliana Grace demonstrates explosive girl power! Just 20 years old, Elliana will amaze audiences as she slips down into the 24-foot long cannon with a diameter measuring just 30 inches! Inside the dark cannon barrel, she will be elevated to a forty degree angle where upon the Ringmaster’s command she instantly becomes the Human Cannon Ball. Elliana will rocket through the arena sky experiencing a G-force of 7, the same fore felt by NASA’s Apollo 16 upon reentry into the Earth’s atmosphere, and land at an incredible distance of 100 feet! The dynamic Duo Fusion and Duo Solys hand-balancers, demonstrate powerful passion and insane flexibility in an exotic presentation of unbelievable symmetry where in a turn of unexpected events the petite females, Virginia and Tatiana are supporting their male partners, Giovanni and Hector. These very distinct yet captivating couples maintain perfect synchronized even as Virginia attempts to balance Giovanni, upside down on her shoulders, poised in three-inch heels and Tatiana attempts to elevate Hector with only one arm.

The Wheel of Steel defies the forces of gravity as four outrageous daredevils including Flavia Costa, a 5’11 female acrobat, propel themselves with cat-like ease in and out the spinning double wheel. Flavia well demonstrate that there is no fear in this feminine feline as she undertakes an unfathomable attempt balancing dangerously on her partner’s shoulders as they spin the wheel rising 40 feet in the air.

The world-famous Ringling Bros. Clown Alley, are the foundation of Built To Amaze! and will fabricate the audiences’ funny bones with hysterical silly antics and clownish comedy.

Celebrate the tradition today and experience its modern flare of twists and turns where excitement and suspense are so intense you’ll be tempted to cover your eyes. From the blueprints to the band, the crates to the clowns, the hammer to the high-wire, witness the spectacle as they measure out the perfect mix of marvel and majesty in an imagination equation where the impossible comes to life. Ringling Bros. and Barnum & Bailey presents Built To Amaze!

I am a Feld Family Ambassador, and in exchange for my time and efforts in attending shows and reporting my opinion within this blog, Feld Entertainment has provided me with complimentary tickets to Feld shows and opportunities to attend private Feld pre-Show events.